Continuing with the sports flavour, here's a set on the world's favorite sport. Enjoy !!
1. He was originally nicknamed Dico. A prolific goalscorer, he is the leading goalscorer for his country in international matches. According to him, the most beautiful goal that he had ever scored was in a match against Juventus (sadly no footage of that goal exists). Incidentally, he is also the first sports personality to be featured in a video game. He holds the record for the most career titles won( he won 32 ) . Identify this very iconic footballer.
2. Identify this footballer. 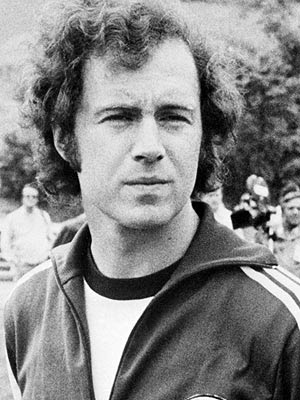 3. He was named as one of the 125 greatest football players still alive in 2004. He played most of his football outside of his home country, representing clubs such as AS Monaco, Saint-Etienne and Montpellier among others. He came out of retirement and almost single-handedly led his country to its best performance in World cup history in 1990. His claim to fame, however, is a goal that he scored against Russia. Name the footballer described.
Connect the above 3 footballers.
ANSWERS
1. Pele
2. Franz Beckenbauer
3. Roger Milla
The connect is Mohun Bagan. Pele was a part of the New York Cosmos team which played against MB in 1977. Roger Milla came to India with Diamont Club in 1990 to play against Bagan as part of their centenary celebrations. Beckenbauer is synonymous with Bayern Munich which came here recently to play against Bagan.
Decent response to the set. Almost all cracked the questions but failed at the connect part. Questions cracked correctly by Lord labak das, immigrant (interesting connect i must say) , E.T. and Ajay.
Posted by Snehal Pal at 9:09 PM

Not sure about the connect.

--> The first two played for NY Cosmos, don't know about Milla
--> Pele held the record for being the youngest scorer in a World Cup, and Milla was the oldest. Becky doesn't here either.

the youngest player in the FIFA finals..pele

the oldest player in the FIFA finals ...dino zoff

and the oldest player to score in the FIFA matches -- milla