Another One to pamper the neglected child 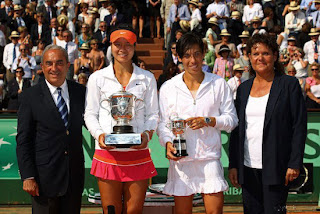 This one is from Annie Sen Gupta (SEQC Goa).

Q: What's wrong with this picture? For additional kicks, who is the person on the extreme right?

From the horse's mouth :

Answer: When Li Na won the French Open women's singles earlier this year, there was a goof-up during the awards presentation. The wrong trophy (a small replica of the winners trophy, which the winner gets to keep) was awarded to the losing finalist Francesca Schiavone. The second picture shows her with the correct trophy.
The woman at extreme right is the Australian Evonne Goolagong Cawley, who became the first non-white person (she is of Aboriginal descent) to win a Grand Slam singles title, when she won at Roland Garros 40 years ago. That was one of 14 Grand Slam titles that she won in the 1970s.

Only Anand Shankar gets this fully right.
Posted by E.T at 4:46 PM

is the runner up given the winner's trophy?