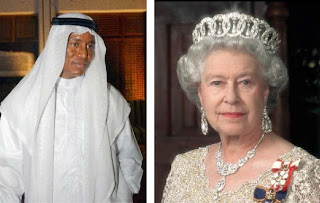 Ans : I apologize if you find this question terrible. The person on the left is Jermaine Jackson (Michael Jackson's brother, and the runner up when Shilpa Shetty won Big Brother). The connect I was alluding to is the worst name a celebrity could give to a child. Frank Zappa named his children Dweezil, Moon Unit, while Bob Geldof named his daughters Peaches Honeyblossom Geldof and Little Pixie Geldof. Jermaine Jackson named his son Jermajesty. (Get it?)
Posted by E.T at 12:34 AM